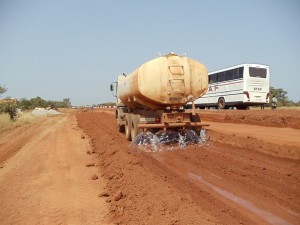 The African Development Bank (AfDB) has announced this week that his board of Directors has granted to Guinea loans totaling $ 50 million to fund a road improvement program and facilitation in commerce. The program focuses on the tarring of 276 km of roads in Guinea, Côte d’Ivoire and Liberia.

The construction and equipment of two side by side checkpoints at borders and the development of social infrastructure such as schools, health centers and bus stations are also planned as part of the same program.

Estimated at a cost of 333 million dollars, road development program and trade facilitation in the countries of the Mano River Union is financed over 93% by AfDB. It is expected to create some 8,000 jobs during the construction period, estimated at three years, to boost the volume of trade between the three countries and reduce vehicular operating costs. For example, the time of border crossing truck freight will be halved, from less than 12 hours after completion of the program, against 24 hours today.

“The signing of the financial agreements is highly symbolic,” said Vice President of AfDB in charge of sector operations, Aly Abou-Sabaa, indicating that the spread of the Ebola epidemic has slowed the process. Reconstruction has begun in the countries of the Mano River Union emerging from the two decades of civil war and is lagging behind in its development.