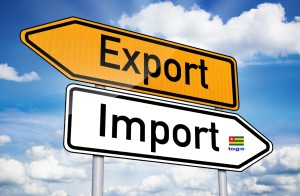 In July 2014, the single counter for foreign trade was initiated in the Autonomous Port of Lomé (PAL). To see the evolution that has been made in the process, the Minister of Trade and Private Sector Promotion, Bernadette Legzim-Balouki did on Thursday in Lomé, a field visit to the port to see the effectiveness of the implementation of the single counter.

In the presence of the General Commissioner of the Togolese Revenue Authority (OTR), Henri Gaperi and CEO of the company which operates the single counter of foreign trade in Togo (SEGUCE-Togo), Olivier Lederer.

After a tour of the various services of the single counter, the minister did not hide his satisfaction.

“We are really pleased with this visit because we have noticed that there was a lot of progress and we hope that the rest of the maritime phase, will do better and the players will be well satisfied”, suggested the minister.

In all cases today, she added, foreign trade in Togo knows a great advance in facilitation.

From March 2015, the maritime phase of the trade will be completely covered by the single counter. “This means that everyone will be integrated into the system, it means that people will not be needed, unless it is necessary to physically move to go their formalities,” she said.

The single counter for foreign trade is intended to facilitate trade for major industrial players. It is a cloud and interactive electronic platform, accessible 24 hours on 24 through the Internet or private network. It connects all the operators and users involved in one way or other in the transportation of any kind of transactions (import, export, transit, transshipment) international trade conducted in Togo. The major objective is to simplify and shorten the clearance of goods drastically.