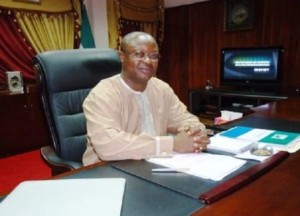 Sierra Leone’s ruling party, All People’s Congress (APC), has released a statement highlighting that since the expulsion of Vice President Sam-Sumana from the party on March 6, there has been no point in time that his life was threatened by the party. Sam-Sumana went into hiding during this weekend after soldiers disarmed his security team and he claims that sources in the presidential guard have informed him that they were acting on presidential orders.

Reports claimed that the Vice president fled to the US Embassy in Freetown and is seeking for asylum but Darby Holladay, a State Department spokesman, refuted such reports and called on all concerned parties to resolve the situation under the dictates of the rule of law.

Sam-Sumana was expelled from the APC under allegations that he was engaged in anti-party activities, including organizing political violence and trying to form a new political party in his district. He denied the allegations and has appealed against his suspension to the party leadership.

Government Spokesman Abdulai Bayraytay said there was no cause for alarm because President Koroma has assured Sam-Sumana’s safety and security. Bayraytay said the latter is only expelled from the party but still “remains the incumbent vice president.” He explained that the change of guards is part of “new security arrangements” because the police and the military are lately under a joint leadership. He referred to the changes as “more of an internal security arrangement and decision undertaken by the Sierra Leone police without having to consult the politicians. So, this is what happened.”

Vice president Sam-Sumana placed himself under 21-day Ebola quarantine after one of his guards died from the disease virus last month. Bayraytay said it also contributed to the disarmament.