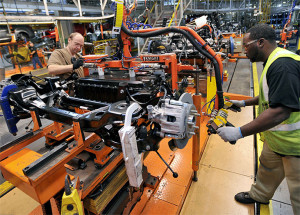 The Ethiopians officials have announced an annual investment of one billion dollars over the next decade in the development of specialized industrial parks. These areas, whose production will be used to boost the country’s exports, will be dedicated to the textile, leather work, agro-industry and other areas requiring abundant workforce, reports Bloomberg on Wednesday 20th May.

“In terms of industrial development and development of the manufacturing sector, we want to make this country the African leader,” said Arkebe Oqubay, Special Advisor of the Ethiopians Prime Minister Hailemariam Desalegn.

According to official sources cited by Bloomberg, funding for this program comes to 50% of the Ethiopian state and the rest of partners interested in the initiative as the International Finance Corporation (IFC), the private equity funds and donor funds from Europe and China.

From the industrial side that will exploit these areas, we note the sizes of interest such as Phillips-Van Heusen Corp company, owner of the famous Tommy Hilfiger and Calvin Klein brands, or H & M AB, the second largest European distributor of clothing. For these companies, the Ethiopian program has the advantage of offering them access to abundant labor and cheap (wages can go down to the tenth of those charged in China) and an input for their production in the USA without taxes, under the African Growth Opportunity Act (AGOA).

According to the government aims expressed in the Vision 2025 plan, the manufacturing sector is expected to experience an annual growth of around 25% with the key to the creation of 200 000 jobs per year. If the importance of the objective can be bewildering, it must be remembered that this is not the first time that Ethiopia has great ambitions in its development plans. Five years earlier, the country wanted its activities in the leather and textiles to grow up to 1500% in 2015.