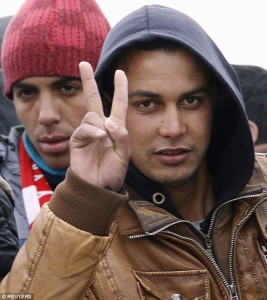 Italian anti-terrorism forces near Milan, in Gaggiano arrested on Tuesday a 22 years old Moroccan national suspected as accomplice in Bardo attack which killed 22 people on March 18 in Tunis.

The Italian forces announced in a press conference that they arrested Abdelmajid Touil, 22, nicknamed Abdallah on the basis of the international arrest warrant issued against himby Tunisian authorities after the attack.

Bruno Megale, chief of the security forces said Abdelmajiid is unkown to Italian security forces but he has been under expulsion warrant issued by Italian authorities in February after he came in Italy as illegal migrant with 15 others. Police suspects his involvement in the attack as he travelled to Tunisia after the attack and return to Italy.

The international arrest warrant was issued against him on voluntary homicide charges premeditated and conspiracy to carry out attack charges.

Police investigations led to the arrest warrant after Abdelmajiid mother lodged a complaint for the loss of his son’s pass-port soon after the attack in Tunis.

“Cooperation of intelligence between services has been successful” Said Bruno Megale.

Abdelmajiid’s mother and brothers have not have been put under investigation.