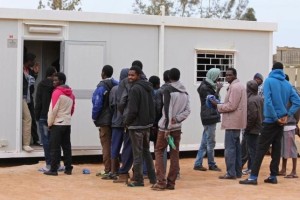 As the European Union gears up to take firm actions against illegal migrant smugglers at Libyan coasts by destroying their installations and networks, Libyan authorities argue that such a plan would not squarely stem the problem if no solution is found at the source.

Speaking at a joint press conference with Prime Minister Thinni, on Sunday, Libya’s Deputy Prime Minister for Service Affairs, Abdelsalam Al-Badri rejected the international community’s accusations about Libyan authorities’ failure to stop the floods of people washing up at Italian and Maltese shores.

”We will not allow any intrusion on Libyan sovereignty and we do not mind preventing migration but this must have two forms of prevention. Migration should be prevented at the source and prevented at the ports of export,’’ he said.

Mr Al-Badri acknowledged that Libya authorities and the entire international community should take the illegal migration crisis from the horns as the humanitarian consequences will forever haunt humanity if nothing is done.

‘’The drowning of migrants in the Mediterranean and the silence about the tragedy, is a stain that history will remember from a moral perspective and in terms of the deliberate negligence in the commitment of the international community,’’ he argued.

Libya is the port of departure towards Europe for many migrants from Africa and the Middle East, fleeing war and poverty.

According to UN humanitarian agencies, more than 60,000 people have crossed the Mediterranean Sea this year, with more than 2 thousand people dead in the perilous crossing. The death toll during the first quarter of 2015 is more than 30 times higher than during the same period of 2014.