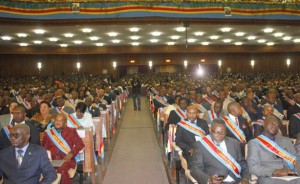 The Democratic Republic of Congo is planning steep cuts in spending across all parts of its current 2015 budget by nearly 12 percent to compensate for a sharp drop in world oil prices, according to a modifying text introduced in the parliament over the weekend by the government of Joseph Kabila.

The Finance Ministry’s proposals were submitted to lawmakers for debate and once approved, a final document can be signed into law by the president.

DRC, the fifth largest oil producer in Sub-Saharan Africa, which is preparing to hold elections this year, earns a lot of income from crude oil.

Oil accounts for around 65 percent of gross domestic product. However crude markets collapsed in the first half of this year, cutting into the revenues of producer countries.

In the new proposals, spending was trimmed across the board, with investment spending slashed by nearly a quarter to around 1.11 trillion CFA francs. Salaries for state employees and debt service were the only two areas where spending was not affected.

Congo’s economy is highly dependent on the oil sector, which accounts for 80% of government revenues and 90% of total exports, according to the 2013 EITI report. The Republic of Congo produced over 300,000 barrels per day in 2013 and received over USD 5 billion in government revenues.  The country holds 1.6 billion barrels of proven oil reserves, according to the Oil & Gas Journal.