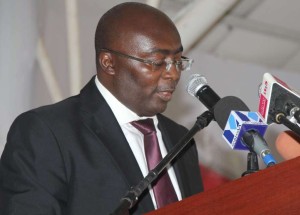 The New Patriotic Party (NPP), an opposition party in Ghana said at a fund raising program this weekend in London that investors are fast losing confidence in Ghana’s economy.

According to the Vice Presidential candidate of the party, Dr Mahamudu Bawumia: “Ghana appears to be having problems servicing her debts and this is making investors lose even more confidence in the economy. There is word out in the financial market circle that Ghana has recently defaulted on its debt to the Standard Bank for the financing of a military project.”

He said this spells doom for the country’s economic growth as the public debt increases to close to 70% of the nation’s GDP.

The Minister of Finance, Seth Terkper has said government will use proceeds from the stabilization fund to help defray Ghana’s debts.

On Monday, the Governor of the Bank of Ghana Dr. Henry Kofi Wampah said Ghana’s debt levels will gradually reduce because of the targeted decline in future deficit and efforts to ensure sustained growth .

Government is expected to originally borrow 25.4 billion cedis in the first half of the year from the domestic market.

This is twice the amount it did from the domestic market last year through bonds and treasury bills. Government has also announced plans to issue a 1 billion dollar Eurobond before the end of this June.