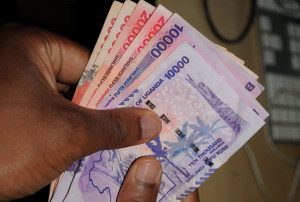 Uganda’s inflation has remained unchanged at 4.9 percent year-on-year in June, thanks to a decrease in food prices, the statistics office said on Tuesday.

According to data released by the agency, the inflation rate was recorded at 4.90 percent this June 30. Core inflation inched up to 4.9 percent from 4.8 percent in the previous month, the Uganda Bureau of Statistics said at a news conference.

Food inflation dropped to 6.3 percent in June from 6.6 percent in May.

“During the month, there was a decrease in prices for matoke, sweet potatoes, Irish potatoes, cassava, tomatoes, egg plants, beans, milk and fish,” the agency said.

Earlier this month, policymakers raised the benchmark lending rate by one percentage point to stem inflationary pressure from a weakening shilling.

In 2014, the effects of inflation were apparent in the rapid depreciation of the Ugandan shilling against the dollar (12 percent) which prompted some speculation in the market as traders demanded and hoarded dollars in expectation of further depreciation.

The country’s gross domestic product (GDP) is projected to grow by 6.2 percent this year.

Despite this favorable forecast, Uganda faces three major obstacles that will likely raise inflation, which in turn will cause depreciation of the shilling as well as rising interest rates. In fact, in 2015, inflation is projected to grow to 5.4 percent from 4.5 percent. Uganda’s economy will likely see bad times this year unless these major challenges are tackled head-on.