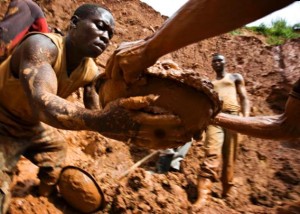 Gecamines, the Democratic Republic of Congo’s state-owned mining company, with a local partner sold a mining concession to Glencore Plc’s Mutanda copper and cobalt venture without announcing the deal.

The International Monetary Fund (IMF) said on Friday that Congo’s government breached its own regulations and the terms of an agreement with the World Bank by failing to disclose the sale of state shares in a joint mining venture.

“This sale of asset by the state-owned enterprise, Gecamines, as confirmed by the company acquiring the asset, was not posted within 60 days of its signing on the website of the Ministry of Mines nor gazette,” the IMF’s resident representative in Congo, Oscar Melhado, said.

“It does not also comply with some criteria of the governance matrix agreed between the government with the World Bank related to posting contracts and competitive bidding for divestment of government assets,” he added.

The governance matrix requires open, transparent and competitive procedures for the sale of mining stakes and that sales are published by the government within 60 days

According to the IMF, “Five recent similar cases of state-owned mining companies selling assets below market value in secret transactions involving Gertler reportedly cost the DRC over a billion dollar”.

In 2012, the International Monetary Fund cancelled a $551 million loan program halfway through because Congo didn’t publish a similar Gecamines deal, breaching the program’s transparency conditions. Congo holds vast resources of copper, gold, diamonds and tin, yet is ranked by the United Nations as the world’s second-least developed country.

The IMF in February said it’s ready to lend Congo as much as $1 billion after learning more about the earlier mining deal, though the Congolese government hadn’t made a formal request.