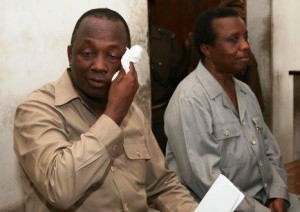 Two former Tanzanian ministers were sentenced to three years in jail after they were found guilty of issuing illegal tax exemptions to a gold audit firm, which cost the government millions of dollars in lost revenues.

Former Finance Minister Basil Mramba and his Energy and Mineral counterpart Daniel Yona will have to spend the next three years behind bars, serving their jail sentence for abuse of office and subjecting the government to 11.7bn/- loss.

The convictions of the two former officials represent two of the most high-profile convictions in the government’s anti-graft drive.

According to the state-owned daily, the firm that received the exemptions was a subsidiary of UK-based Alex Stewart International.

The ex-ministers were accused of abusing their authority in 2002 by “arbitrarily” awarding a contract to audit gold production from Tanzania, Africa’s fourth biggest producer.

It was alleged that the two former ministers committed the offences between August 2002 and June 14, 2004, in Dar es Salaam, by giving preferential treatments to M/S Alex Stewart (Assayers) Government Business Corporation.

The case followed three years of investigations by the Prevention and Combating of Corruption Bureau (PCCB) and the police into the suspicious hiring of Alex Stewart (Assayers) Government Business Corporation (ASA) to audit gold production in Tanzania.

The court convicted Mramba, 75, and Yona, 76, of illegally extending an audit contract for two years after its expiry in 2005, disregarding a team set up to review the deal.

Mramba was accused of using his position as finance minister to unlawfully exempt a local subsidiary of the auditor of paying 11.75 billion Tanzanian shillings ($5.3 million) in government taxes.