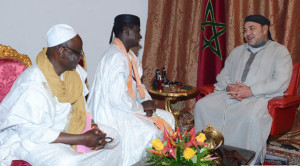 Part of its multifaceted African strategy, Morocco announced on Monday the creation of the Mohammed VI Foundation for African Ulemas, an institution seeking to unify the efforts of Ulemas of Morocco and African countries to serve Islam, combat extremist thought, preach the values of tolerance and promote research and studies in the field of Islamic thought, as stated in the Dahir creating the foundation.

The creation of the Foundation was announced at an official ceremony held under the chairmanship of King Mohammed VI, Commander of the Faithful, and attended by several Moroccan and foreign scholars, visiting Morocco to partake in the Hassanian lectures delivered on the occasion of the holy month of Ramadan.

Moroccan Minister of Endowments and religious affairs, Ahmed Toufiq, was appointed Deputy Chairman of the Foundation.

In an address on behalf of African Ulemas, Chairman of the Fatwa Committee and of the Council of Islamic Affairs in Nigeria, Sheikh Ibrahim Saleh Al-Hussaini, hailed the creation of the Foundation as very timely, especially, he said, that “we live in times of sadness and suffering because of the situation of the Ummah, as a result of the extremism and religious excess affecting many countries.”

Morocco’s religious ties with Africa are centuries old. They date back to the eleventh century when the Moroccan Almoravids dynasty expanded in sub-Saharan and West Africa, spreading the Maliki rite and reaching out to worshipers through Sufi channels and methods.

Later on, especially around the eighteenth century, Moroccan Sufi orders widely spread in the area, such as the Tijaniya, the Qadiriyya and Chadiliya sufi orders gaining large numbers of devotees who identified with Morocco, where Sheikh Ahmed Tijani, the founder of the Tijaniya order, is buried. Up to date, thousands of Africans go on pilgrimage to Fes to visit Sheikh Ahmed Tijani’s mausoleum.

In addition to that, Morocco’s religious authority, the King being Commander of the Faithful, is recognized and venerated by many Africans, whether in Mali, Senegal, Côte d’Ivoire and elsewhere.

The schedules of all the visits King Mohammed pays to African countries include meetings with the leaders of major Sufi orders in these States and during these visits, he usually donates thousands of copies of the Quran to mosques and other Muslim institutions. Besides, he regularly contributes to building or refurbishing mosques in African countries.

Morocco thus shares with African States the same doctrine, the same rite and the same Sufi sensitivity, consistent with the path inherited from Prophet Mohammed’s Sunnah.

“We all follow the achaarite doctrine, the Maliki rite and the way of Imam Al Jounaid related to behavioral practices, which is why we consider the call for the creation of this Foundation as an initiative intervening at the right time,” said Sheikh Ibrahim Saleh Al-Hussaini.

Morocco has made of religious personnel training a major component of its anti-terrorism strategy to promote a moderate, open and tolerant Islam, help fight the spread of extremism and thwart the extremists’ attempts to attract Muslim youths.

As put by Anouar Boukhars, a non-resident scholar at the Carnegie Endowment for International Peace in a recent analysis, “Morocco is deploying religion as an instrument of stability and likes to promote its moderate brand” of Islam…and “is trying to position itself as a counterweight to radicalization and an important player in solving security issues in the Sahel.”

In March this year, King Mohammed VI inaugurated the Mohammed VI Institute for the Training of Imams, Morchidines, and Morchidates in the capital city, Rabat. The training is based on the Maliki rite and Sunni Sufism. At present, some 500 Imams and preachers are enrolled at the Institute, including 212 Malians, 100 Guineans, 100 Ivoirians, some 30 Tunisians, in addition to 23 French. After their religious training, these Imams, Morchidines and Morchidates will be called to preach in their respective countries the values of a moderate Islam which has nothing to do with the extremist propaganda.

Part of these relentless efforts to promote moderate Islam and counter extremism, King Mohammed VI has recently issued a decree to revive the Fes-based Al Qarawiyyin University as a center of Islamic studies and knowledge and as a center of training in religious sciences and the History of Islamic thought and civilization.

The King stresses in the Decree the need to “promote the University together with the institutions falling within its scope, review its syllabi and teaching methods to upgrade the curriculum of Islamic studies in general and of the Maliki doctrine studies in particular, modernize the institution and also preserve it as a center of learning and scientific research.”

The new foundation is therefore an additional link in the chain of moves initiated by Morocco to consolidate moderate Islam and preserve Muslims from extremism and radicalization that only bring in havoc and chaos and another Pillar of its spiritual diplomacy.