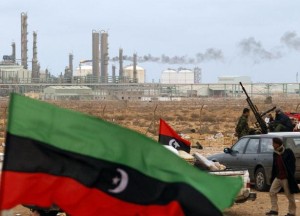 Three tankers have moored at the eastern Libyan ports of Hariga and Brega to load two million barrels of crude, oil officials said on Sunday.

According to press reports, Eastern export terminals (Es Sider, Ras Lanuf and Zueitina) remained closed because pipelines have been blocked by protests or the insecurity prevailing in the country since Muammar Gaddafi was toppled in 2011.

According to Mashallah Zwai, the oil minister in one of the country’s rival governments which controls Tripoli, Libya is currently producing nearly 400,000 barrels of crude a day.

Authorities shut down Libya’s biggest steel firm this week due to electricity shortages after fighting and lack of spare parts disrupted the power grid.

More than half of Libya’s output comes from the eastern state oil firm AGOCO, a subsidiary of the national oil firm NOC. It runs the Hariga port and the Sarir field, the country’s biggest.