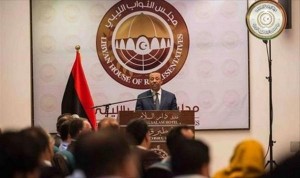 The 20 September deadline eyed by U.N special envoy Bernardino Leon to reach an agreement between the rival Libyan governments received a blow on Tuesday when the spokesman of the Tobruk-based House of Representatives (HoR), Faraj Buhasahim, announced the rejection of the amendments made to the draft in the past few days.

The spokesman announced HoR delegation has been recalled for consultations although Leon said on Sunday that a “consensus” had been reached between the delegates.

Some of the amendments rejected by the HoR include the replacement of Generals Khalifa Haftar and Abdul Razzak Nazhuri as well as increasing the powers of the State Council and the eligibility of Tripoli based General National Congress (GNC) members to it.

The Tobruk parliament had earlier on warned that amending the draft will lead to unspecified measures.

Buhasahim said they still support the July version of the draft deemed as a “near-final” draft agreement by Tripoli. Authorities in Tripoli have not reacted to the announcement. Leon wants an agreement to be reached before HoR’s mandate ends on 21 October.

There are increasing speculations in Tobruk that a military council headed by General Haftar will take over and that could derail the peace talks because Tripoli considers Haftar to be one of the key figures who should not be part of the Unity government.

Reports are emerging that Haftar’s men have stopped Prime Minister Thinni from travelling to Malta at the Labraq airport and former Prime Minister Al-Baghdadi Al-Mahmoudi’s London-based attorney Karim Khan has raised concerns that the Tripoli government is planning to execute him together with other senior officials of the Gadhafi era on Thursday. Former intelligence Chief Abdullah Senussi is said to be among them.