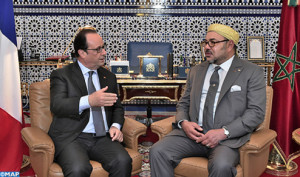 Morocco’s King Mohammed VI and his guest, President Francois Hollande of France, have both voiced their shared resolve to give a new momentum to their partnership and at the same time to work together to fulfil their respective ambitions in Africa.

During the summit talks held over the weekend in Tangiers during President Hollande’s two day official visit to Morocco, Paris and Rabat pledged to work together as their economic ambitions in Africa match up, especially in West Africa, where Morocco, which positions itself as the link between Africa and Europe, has already a strong foothold.

According to some French and Moroccan sources present during the visit of the French President, Paris and Rabat are planning to jointly build ports in Africa, and to invest in the railways business, real estate and Agriculture.

According to these sources, Paris and Rabat seek to counter the economic advance of China, India, Turkey, and the USA on the African continent deemed as the most promising current and future economic and investment hub of the world.

France and Morocco are looking to deepen their footprints on the black continent.

An official statement released by the French presidency on the occasion of the visit hailed Morocco’s role in North Africa, sub-Saharan Africa and in the Arab World. The Elysee also praised Morocco for its commitment to West Africa pointing out that the presence in West Africa of several Moroccan companies, such as Maroc Telecom, Royal Air Maroc and Attijari Wafa Bank, translates to the best the success of Morocco’s Africa-oriented diplomacy and strategy.

This Africa strategy is spearheaded by King Mohamed VI who paid several visits to a number of African countries since he took power in 1999. The latest such visits last May took the Moroccan sovereign to four countries, namely Senegal, Guinea Bissau, Côte d’Ivoire and Gabon.