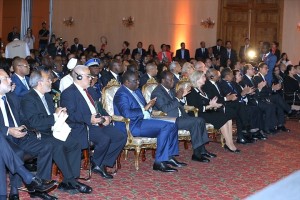 Morocco has called again on the international community to pool efforts to help Africa unleash its potential and to help change the living conditions of African people who are facing never-ending struggles and daily challenges, through the adoption of an inclusive, coordinated and multi-dimensional medium-term approach.

“African people’s lives are a never-ending struggle, full of daily challenges. They have to face harsh conditions and can only rely on scant resources,” said Morocco’s King Mohammed VI.

In an address before the ongoing UN General assembly read on his behalf by his brother Prince Moulay Rachid, Mohammed VI insisted that “Africa must be at the heart of international cooperation for development in order to help the continent rid itself of its colonial past and unlock its potential.”

“Urgent, practical initiatives are required because deteriorating conditions and the people’s daily pressing needs cannot be put on hold until international bureaucracy wakes up and makes the necessary decisions,” he said before he called on the United Nations and on regional and international financial institutions “to draw up an action plan for economic transformation in Africa and provide steady resources to finance it.”

He pointed out that “without substantial and tangible international support, Africa will experience glaring disparities between countries.”

“There will be nations engaged in the pursuit of development and progress, while others will be desperately seeking to address their problems and will sink further into poverty, ignorance and instability.”

The king who is familiar with the situation in Africa insisted that “development cannot be achieved through bureaucratic decisions or ready-made technical reports that have no credibility,” and that in order “to fulfil people’s aspirations and to address their real concerns, it is necessary to fully understand the reality of their situation and their characteristic features, make an objective assessment of their living conditions and carry out serious work on the ground.”

“The reality is much bleaker and far bitterer than reports by some international governmental and non-governmental organizations suggest,” King Mohammed VI warned, calling on the international community to adopt “an inclusive, coordinated and multi-dimensional medium-term approach” to address the situation.

The King who also touched on the National Human Development Initiative (INDH) launched in Morocco in 2005 said the initiative contributed not only to reducing poverty, vulnerability and exclusion, but has also helped reduce inter-regional disparities and enabled the country to achieve the first of the Millennium Development Goals as early as 2013.

Renewing Morocco’s willingness to put its experience in this field at the disposal of its partners, especially in Africa, King Mohammed VI said his country “has come up with quality national responses” that contribute to international efforts to rise to unprecedented global challenges, mainly regarding migration and human rights, climate change and sustainable development, and the fight against terrorism.