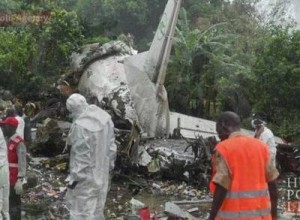 Russian-made Antonov cargo plane with passengers on board crashed on Wednesday after taking off from the airport in South Sudan’s capital, killing at least 41 people on the flight and on the ground, Reuters reported quoting an officials and a witness.

According to Radio Miraya, an UN-backed station, as many as 40 people were feared dead.

A crew member and a child on board survived, presidential spokesman Ateny Wek Ateny said.

The cause of the crash might have been engine failure, Ateny said, although he cautioned this had not been confirmed.

According to him, an unknown number of people were killed on the ground as the Antonov plane crashed near where some fishermen were working.

South Sudan is the world’s newest country, having gained independence from Sudan in 2011.

This is the second Russian plane to crash in the last four days. On Saturday, a Russian passenger plane went down in Egypt’s Sinai desert, killing all 224 people aboard. The cause of that crash has not been established yet, although the Islamic state group in Sinai claimed it downed the plane.

Egypt’s President Abdel Fattah al-Sisi has however dismissed, in an interview published Wednesday by The Telegraph, the claims that terrorism is to blame for the plane crash.

The Egyptian leader rejected reports that the jet had been downed by a missile or a bomb as “unfounded speculation.”