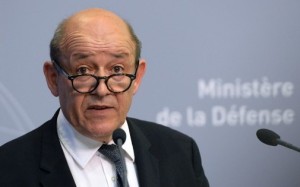 The French Defense Minister, Jean-Yves Le Drian on Sunday urged Rival parties in Lybia to reach a deal to create a new unity government in order to stop Islamic State jihadists from taking over the North Africa country.

“There must be an intra-Libyan accord between these two rival factions, or else Daesh will win,” Jean-Yves Le Drian told Europe 1 radio.

He warned that “Daesh (IS) is taking territory starting from Sirte and seeking to move down towards the oil fields.”

IS, which already controls large parts of territory in Iraq and Syria, has exploited the chaos that has spread across Libya since the 2011 revolution.

Le Drian called for an international summit bringing together neighbouring countries as soon as possible to get some kind of political agreement in Libya.

“It is an emergency. Tunisia is nearby, Egypt is nearby, Algeria is directly concerned, Niger, Chad … these countries need to be able to organize a forum with the support of international organizations and the United Nations,” he said.

On Sunday, the new United Nations envoy to Libya, Martin Kobler, urged warring factions to sign up to a previously negotiated agreement for a unity government, saying there could be consultations but no changes to the draft.

“I encouraged and I urged the members of the House of Representatives to go for a positive vote. This country deserves better than being in a bad economic state as it is now,” he said.

After his visit to Tobruk, Kobler held talks in Tripoli with the General National Congress (GNC) to whom he conveyed the same message as to the need to go on with the dialog process.