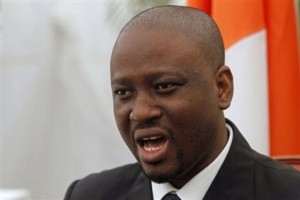 A French judge has issued an arrest warrant on Monday for Ivory Coast’s parliament speaker Guillaume Soro after he failed to appear in court.
The court is investigating accusations made by Michel Gbagbo that Soro and military officers illegally arrested him and treated him inhumanely in April 2011.
Gbagbo was arrested with his father, former President Laurent Gbagbo under Soro’s command at the end of a brief civil war in April 2011. Soro was prime minister at the time.
A source close to the matter said French police attempted on Monday to serve the warrant at Soro’s Paris residence. The warrant calls for Soro to be brought before Judge Sabine Khéris after he did not comply with several previous summonses.
Soro has no immediate plans to leave Paris where he is representing the West African nation at the United Nations climate talks, Moussa Toure, his spokesman told reporters on Monday.
While Soro has diplomatic immunity, he is willing to cooperate with the judge if a formal request that follows diplomatic protocol is sent to the Ivorian government, Toure said.
“Soro will follow his planned schedule,” Toure said. “He is not a fugitive.”
According to the former rebel leader’s legal team, he had been within his legal rights to arrest Michel Gbagbo, who was captured along with his father at the presidential residence. They rejected allegations that there had been any violence during his detention.
President Laurent Gbagbo is awaiting trial at the International Criminal Court on charges of crimes against humanity related to the deaths of about 3,000 people after he refused to concede a loss in 2010 elections to Alassane Ouattara.