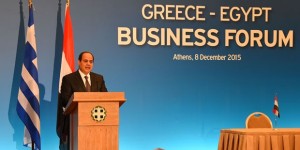 Egypt’s huge Mediterranean gas deposit exploitation charms Geek political leaders and companies who Tuesday promised to expand their economic ties with Egypt as President al-Sissi is visiting Athens.
Greek Prime Minister Alexis Tsipras gave the tone as he praised President al-Sissi for his visit and the opening of new era in economic and trade connexion between the two countries.
“There are enormous opportunities for cooperation between the two countries — opportunities that did not previously exist,” Greek Prime Minister Alexis Tsipras told a gathering of Greek and Egyptian business people.
Greek companies hope to take active part in the exploitation of the Egypt’s newly discovered huge gas deposit in South Mediterranean deemed by the Italian company ENI as the largest gas deposit ever discovered in the region.
Reports say Greek companies eye shipping, energy and construction contracts. Tsipras and Sissi only on Tuesday signed a port cooperation agreement.
The two leaders will be joined on Wednesday by Cypriot President NicosAnastasiades for a third round of three-nation talks for further talks said to be dominated by the exploitation of the Mediterranean undersea gas deposits as well as regional security, reports say.
Greek is looking to revive its ailing economy with this new partnership with Egypt.
“Your visit inaugurates a new period of close cooperation between the two countries,” Tsipras said as he welcomed al-Sissi.