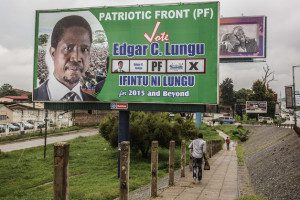 Zambia will hold new presidential and parliamentary elections on August 11 under a new constitution; the government said on Monday.
“The new Constitution has a fixed election date, and that will take effect as soon as the president signs,” the government spokesman Amos Chanda told reporters.
According to Chanda, The Head of State will append his signature to the Constitution Amendment Bill on Tuesday that will mark a milestone after several attempts previously failed.
Presidential candidates will run on a joint ticket with a vice-presidential candidate, unlike the present situation where the president appoints his deputy, Chanda said
The Bill of Rights has been pushed to a referendum that will be held alongside the 2016 general elections.
Among some notable clauses that will become law are the 50 percent plus one vote requirement for a presidential winner, the vice-president as a running mate, the election date and dual citizenship.
As a reminder, Presidential elections were previously held in Zambia in January 2015 to elect a president to serve out the remainder of the term of President Michael Sata, following his death on October 28, 2014. Lungu narrowly won the election with 48.3 percent of the vote.
The coming elections are expected to be a tight contest between President Edgar Lungu’s ruling Patriotic Front (PF) party and Hakainde Hichilema’s opposition United Party for National Development (UPND).
Speaking when he addressed the nation on the eve of the New Year, President Lungu said: “the year 2016 will be a special one in the history of Zambia, as this will be the first time that the country will be going to the polls, under the fifty percent plus one vote and presidential running mate provisions.”