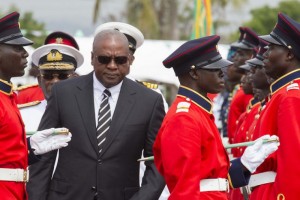 Ghanian President John Dramani Mahama on Monday announced changes in the top hierarchy of the west-African nation’s Armed Forces.
The major shakeup has hit the Chief of Defence Staff, the chief of Air Force Staff, the Chief of Naval Staff, and the Chief of Staff at the General Headquarters. Other Strategic departments of the army were also subject to changes.
No comment was provided in the presidential decree released late on Monday, but recently, in an address to the nation, President John Dramani Mahama called on members of the Ghana Armed Forces to exhibit a high sense of professionalism by serving the citizenry with efficiency, morality and integrity.
Such professionalism, he stated, would also help them to lift high the flag of Ghana by warding off emerging criminal activities initiated by non-state actors in the country and beyond.
President Mahama said sophisticated arms and weapons, unfortunately, were slowly creeping into illegal hands and urged the officers to step up their vigilance and surveillance all over the country to subdue any act of violence and lawlessness that may erupt.
The President mentioned suicide bombing, piracy, drug trafficking, and the invasion of territorial waters as some of the crimes.
As a reminder, Ghana goes to the polls on November 7 to elect a president and parliamentary candidates. There have been concerns over the voters register as the main opposition party insists the current register is bloated and unfit for the elections.
Former President John Rawlings called on retired security officers in the country to help safeguard the integrity of the country’s elections which he said is on ‘high risk’