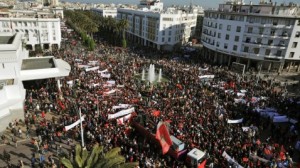 A massive march staged Sunday in Rabat to protest against the UN Secretary General and his biased stand regarding the Sahara conflict has once again given evidence of the Moroccans’ unanimity and consensus over the Sahara as a Moroccan territory.

Actually over 3 million men and women of all ages made the trip to Rabat coming from all the regions and cities of the country to take part in the march held at the initiative of political parties, unions, civil society associations and other NGOs.

The call for the march came following Ban Ki-moon’s statements during his visit last weekend in the Polisario-controlled Tindouf camps and in Algiers, to supposedly revive the stalled Western Sahara peace process. However, instead of sticking to neutrality to push the process forward, the UN head aligned with the thesis upheld by Algeria and the Polisario and spoke of the Sahara as “an occupied territory.” He also brought up the option of “self-determination referendum” although the idea was buried as unworkable years ago.

The demonstrators, spurred by nationalist fervor, marched through the main street of downtown Rabat, chanting patriotic slogans, decrying Ban Ki-moon’s lack of neutrality and biased mediation, and brandishing thousands of banners, saying that Ban Ki-moon threatens the UN peace process and has violated the UN Charter and that the Sahara is Moroccan and will remain Moroccan forever.

The 3 million marchers have reiterated thus their attachment to their Sahara and their opposition to any attempt at their country’s territorial integrity.

Last Tuesday, the Moroccan Government issued a statement condemning in the strongest terms the blatant bias evidenced by the UN Chief.

On Saturday, the two houses of the Parliament held an extraordinary session and issued a joint statement strongly condemning as “provocative and biased” the UN Chief’s stance.

The comments made by Ban Ki-moon “ignore the noble objectives” of the United Nations and are a “blatant breach” of the principle of impartiality that the UN Secretary General must observe, the statement said.

In their statement, the MPs also pointed out that the UN chief’s behavior showed that he ignored some historical realities about the Sahara issue as well as United Nations positions and resolutions, including resolutions dating back to 1960 which state that “any attempt aimed at the partial or total disruption of the national unity and the territorial integrity of a country is incompatible with the purposes and principles of the Charter of the United Nations” and emphasizing that the concept of “self-determination” does not necessarily mean secession and cannot be incompatible with the right of states to complete and maintain the unity and integrity of their national territory.

Several of Morocco’s allies and sisterly countries have also distanced themselves from the attitude of Ban Ki-Moon, including the member states of the Gulf Cooperation Council, France and the United States.

These states and all the countries backing a mutually acceptable political solution, as called for by the Security Council, are fully aware of the danger to have another fragile micro-state in the already fragile Sahel-Sahara region and subsequently back the autonomy initiative proposed by Morocco as a basis to reach a final settlement to the regional conflict that is so costly for the whole Maghreb.