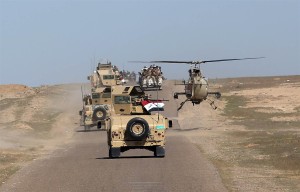 Iraqi Brigadier General Yahya Rasool, spokesman for the Joint Military Command, said the operation to free Mosul, a town held by the Islamic State since 2014, has begun. The city is 225miles northwest of Baghdad.

Taking over the city will be a huge blow to the extremist group and would serve as a symbolic political and psychological victory to Baghdad. Iraqi officials have on several occasions announced military operations against IS but success had hardly come by.

The operation to retake Mosul is baptized “Operation Conquest” and the Iraqi forces have taken over several villages near Makhmour, east of Mosul. The U.S-led air campaign is providing aerial power. IS group is alleged to be using land mines, suicide bombers and snipers to fight and slow the progress of the offensive.

Prime Minister Haider al-Abadi had claimed that his forces would take over the city but some security officials believe that the battle for Mosul could go on till 2017. In February, Lieutenant General Vincent Stewart of the United States, head of the Defense Intelligence Agency, said he was “not as optimistic” as the Prime Minister.

Operation Conquest has stretched out IS because it is also battling with the Syrian forces at Palmyra. There are reports that the extremist group ordered the civilians to leave the city as fighting goes on. Russian airplanes are providing aerial support to pro-Damascus forces.

Historians and Archaeologists are hoping that the Syrian forces will take over the town to salvage the World Heritage Site’s relics that the extremist group began to destroy shortly after arriving in the city last year.