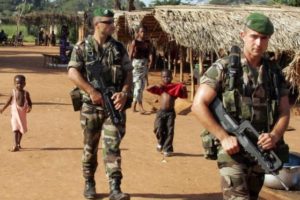 While visiting French forces in the Ivorian capital, Jean-Yves Le Drian said France will increase the number of its troops in the West African nation which hosts a regional base for French forces.

“This summer the French forces in Côte d’Ivoire will increase from 500 to 900 men and form the forward operating base for West Africa,” Defence Minister Jean-Yves Le Drian said.

He said the increase has already been budgeted.

“I confirm the increase in numbers of French forces here in Abidjan from 500 to 900 as part of the reorganization of our forces. They form the forward operating base for West Africa,” he said.

Abidjan is one of three “reservoirs” of French troops in the world.

The world’s top cocoa producer has been lauded for its political and economic progress since the political uncertainty that began in 2002 culminating in an electoral crisis in 2010 that later saw the arrest of former President Laurent Gbagbo who now faces trial at the International Criminal Court in The Hague.

The United Nations Security Council on Thursday lifted a 12-year sanctions regime on the country and renewed for one more cycle the UN Mission to the country.

The United Nations Operation in Côte d’Ivoire (UNOCI) of almost 7000 troops and police will be completely withdrawn by June of next year.