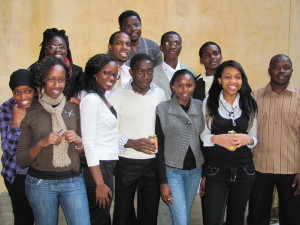 Youth in Africa are the key to future prosperity in the continent provided sufficient jobs are created and young people are adequately trained to acquire new skills.
According to the African Economic Outlook 2012, creating productive employment for Africa’s rapidly growing young population-whose number is set to double by 2045- is an immense challenge but also the key to future prosperity.
Countries across the continent should boost job creation and help young people acquire new skills, says the report, adding that youth represent 60 percent of the continent’s unemployed, and of these 40 million youths, 22 million, many of them women, have given up on finding a job.
Between 2000 and 2008, despite world-topping economic growth rates, and a better educated youth, Africa created only 16 million jobs for young people aged between 15 and 24.
The report warns that unless Africa moves swiftly to make youth employment a priority and thus secure them decent living conditions, youth unemployment figures will increase, a situation that will constitute a significant threat to social cohesion and political stability.
The report recommends that African countries design better coordinated strategies to effectively tackle youth employment, focusing on job creation in the private sector while providing the right conditions for businesses of all sizes to grow and expand their work force.
Increased policy focus on youth employment must be coupled with measures to boost investments in social and economic infrastructure and diversify the continent’s economy, the report said. It also urged governments to improve the quality of education, mainly in agriculture and new technologies, and to focus on the informal sector and rural areas, which contain immense entrepreneurial talent and can serve as engines for inclusive growth since they can absorb higher numbers of unemployed youths.
The African Economic Outlook presents a comprehensive analysis of the economic, social and political developments in the region.
About Geraldine Boechat 2189 Articles
Senior Editor for Medafrica Times and former journalist for Swiss National Television. former NGO team leader in Burundi and Somalia