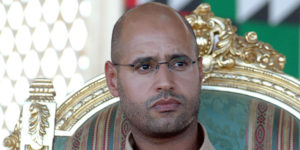 Libyan Former ruler’s son Saif al-Islam Kadhafi, also known as the second in command after his father, has been freed since April thanks to an amnesty deal despite calls by the International Criminal Court (ICC) to try him on crime against humanity charges, reports say.

Arrested in October 2011 following the fall of his father, Said al-Islam had been held in a secret prison in Zintan by the town’s militia. He was sentenced to death in July last year along with 37 others but the sentence has never been executed.

His liberation has been confirmed by Khaled Zaydi, one of his lawyers, who told French reporters that his client was freed in April.

French Le Monde, citing Libyan sources, also reports that Saif al-Islam has been seen moving around in Zintan since September last year. Other Libyan sources revealed that he has been under house arrest and lives with his new wife and three- year old toddler.

Saif al-Islam was freed under an amnesty law voted by Libya’s internationally recognized parliament, the Tobruk-based House of Representatives (HOR) in September. The law provides for general amnesty even to members of Gaddafi’s circle in a move to promote peace and reconciliation.

In a sign of reconciliation, the parliament also allowed the return of Saif al-Islam’s mother, Safia Farkash.

The unity government known as the Government of National Accord (GNA) at odds with HoR has slammed the release of Saif wanted by the ICC. The Hague-based court has called on the United Nations sponsoring the GNA to put pressure on Libyan authorities to transfer Saif to the Netherlands.

Analysts argue that call will be difficult to heed as Misratan officials, who have been loyal to the GNA and have been at the forefront of the fight against the Islamic State militants in control Gaddafi’s hometown of Sirte, believe that reconciliation in needed to heal wounds created by the 2011 revolution.