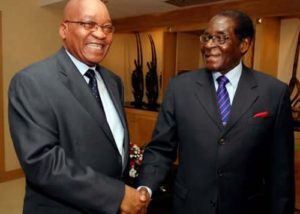 In a paper entitled: ‘A Betrayal of Mandela’s Legacy’, Dewa Mavhinga, a Senior Researcher of HRW Africa Division said ‘‘South Africa has long failed to call out the Zimbabwean government for its abuses against opposition members and ordinary citizens.”

According to the right group, the silence of the Jacob Zuma led-government is in discord with the values that South Africa’s first black leader, Nelson Mandela, stood for.

A week ago, a burgeoning anti-corruption movement in Zimbabwe successfully organized a nationwide “stay away” that left businesses and schools closed.

The protest was precipitated by an economic implosion that has left banks cashless and government workers unpaid.

More than 100 people were arrested across the country, and numerous processions of protesters were met with tear gas and baton charges.

President Mugabe, the only ruler the southern African nation has known since achieving independence 36 years ago, has been criticized for repeatedly failing to follow through on promised political and economic reforms. The country’s economy has collapsed, leaving an estimated 90 percent of Zimbabweans out of work.