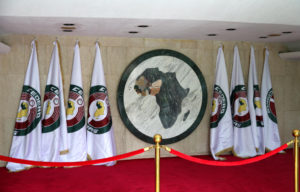 West African countries have agreed to investigate the impact of Nigeria’s decision last year to close off its land borders to trade, Nigeria’s presidency said on Monday.

Africa’s most populous nation has banned the import and export of all goods through these borders since last August as part of what it described as a campaign to tackle smuggling.

A statement released by a spokesman for Nigerian President Muhammadu Buhari said Heads of state from the Economic Community of West African States agreed Sunday night to set up a committee “to study and make a full report on Nigeria’s land border closure with her neighbors.”

There is no timeline for when the report is due, but it is meant to be completed “as soon as possible,” Nigerian Foreign Minister Geoffrey Onyeama said, according to the statement.

Nigeria and 14 other West African countries are members of ECOWAS and are signatories to the protocol on free movement of persons, goods and services in the sub-region.

Promulgated in 1979, the protocol provides a legal framework granting member states’ citizens the right to enter, reside and engage in economic activities in the territory of other ECOWAS members.

Posted by Emmanuel Agbenonwossi on February 11, 2020. Filed under Business, News, Zoom. You can follow any responses to this entry through the RSS 2.0. Both comments and pings are currently closed.