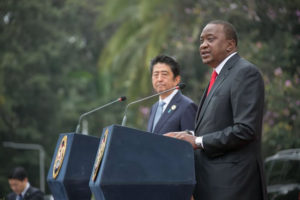 The Japanese government this weekend pledged to give Kenya about $9.78 million in aid to spur economic and social development in the Eastern African nation.

Speaking during the Tokyo International Conference for African Development (TICAD) in Nairobi on Sunday, Kenyan President Uhuru Kenyatta said that the summit of African government and business leaders with their Japanese counterparts had “the potential to transform the African continent.”

“We laud Japan and the co-organizers for their continued commitment to Africa’s development, on the basis of the twin principles of Africa’s ownership and international partnership,” Kenyatta said.

Note that Japan’s overall direct investment in Africa totaled $1.24 billion in 2015, down from about $1.5 billion a year earlier, according to the Japan External Trade Organization, which does not provide a breakdown of sectors.