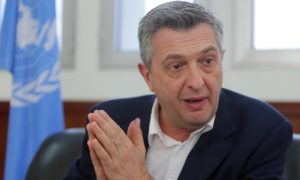 “Uganda is in the middle of an unstable region and being a stable and peaceful country they are somehow compelled to receive thousands of refugees every day. In Europe the same number of new arrivals per day could bring governments down,” the United Nations High Commissioner for Refugees Filippo Grandi said.

He called on the international community to do more to ease the refugees’ plight.

“I want to make an appeal to your leaders [South Sudan] to behave responsibly and stop punishing innocent civilians. I hope you can go back when peace returns,” he said.

UNHCR data shows that 88,533 people have fled South Sudan for Uganda since July when fighting broke out between rival factions in the capital Juba.

Uganda has been praised for hosting nearly 320,000 South Sudanese refugees as well as others fleeing political unrest and violence in Burundi and the DRC.