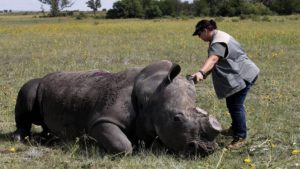 Zimbabwe will dehorn nearly 100 rhinos residing in its state parks in order to curb poaching in the southern African nation, Reuters reports.

Private conservancies, which house some 600 additional rhinos, may also choose to dehorn their rhinos.

Fifty rhinos were killed in Zimbabwe last year, double the figure for the previous year.

“We are in a crisis, we are losing these animals at an alarming rate and I don’t personally like doing this to the rhinos but it’s something that has to be done. I have no doubt in my mind that if we had not been dehorning those animals since 2010 those populations would no longer exist. You just have to look north in the Zambezi valley, the statistics for elephant poaching. We’ve lost between forty to seventy percent of our elephants up there,” said Veterinarian Lisa Marabini.

Two months ago, Zimbabwe put its wild animals up for sale, saying it needed buyers to step in and save the beasts from a devastating drought.

A drought across the region has left more than 4 million Zimbabweans needing aid and hit the crops they rely on for food and export earnings, from maize to tobacco.

It has also exacerbated an economic crisis in the cash-strapped country that has largely been deserted by foreign donors since 1999.