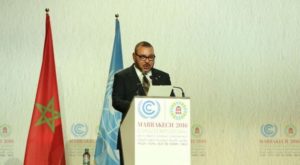 King Mohammed VI stressed Tuesday in Marrakech the importance of the 22nd UN conference on climate change, convening in Morocco, saying COP22 is a decisive venue in the implementation of the Paris Agreement.
“The whole of mankind is pinning great hopes on the resolutions to be endorsed. It is expecting more than just a declaration of commitments and principles to curb greenhouse warming and mitigate its effects”, added the Sovereign in his speech made at COP22.
Indeed, humanity is looking forward to decisions which will help save the future of life on earth, and calling for tangible initiatives and practical steps to preserve the rights of upcoming generations, stressed the Monarch.
He deemed that “holding this conference in Africa is an incentive for us to give priority to tackling the adverse repercussions of climate change, which are growing worse and worse in the countries of the South and in insular states whose very existence is in jeopardy”.
He also said that the last fifteen years have witnessed the emergence of a discourse expanding on environmental issues, together with an increase in the number of NGOs involved in environmental advocacy.
“More importantly, this period has been marked by growing awareness of the importance of preserving the environment”, said King Mohammed VI, stressing the need of stepping up coordination and cooperation from all players.
According to the Moroccan Sovereign, plenty of promises were made at previous UN climate conferences, but the Marrakech conference is a “conference of truth and clarity, a conference for responsibilities to be shouldered before God and History and before our peoples”.
He went on to say that the environmental issue is a critical problem which must be tackled in the most serious and responsible way.
“The era of colonialism is over. The logic of imposing decisions is over. What is at stake is the very existence of man. It is therefore our joint duty to work hand in hand to protect mankind”, stressed the Monarch in his COP22 speech.
He warned against wait-and-see attitudes in addressing climate change, saying that procrastination will jeopardize security and stability and exacerbate the already expanding hotspots of tension and crises throughout the world.
The King of Morocco urged all parties to work on translating shared commitment into actions by providing the countries of the South with urgent financial and technical support to enhance their capacities and enable them to adapt to climate change.
He also called on advanced countries to honor their commitments and raise 100 billion dollars at least by 2020 in line with the goals set out by the Paris Agreement last year.