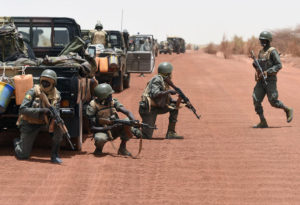 About 37 people were killed and many others were injured in northern Mali in a car bomb attack on a military base.

According to local media, the incident occurred when a vehicle packed with explosives detonated at a camp housing soldiers and members of rival armed groups in the city of Gao.

The camp was housing government soldiers as well as members of various rival armed groups, who together conduct mixed patrols in line with a U.N.-brokered peace accord aimed at quelling violence in Mali’s restive desert north

Mali last year concluded a peace deal between the government, its armed proxies, and Tuareg-led rebels who have launched several uprisings since the 1960s. The deal’s implementation has been patchy.

Gao has been rocked by deadly fighting for control between armed groups, which were party to the peace deal.

The ongoing international military intervention that began in January 2013 in the West African nation has driven Islamist fighters away from the major urban centers they had briefly controlled, but large tracts of Mali are still not controlled by domestic or foreign troops.