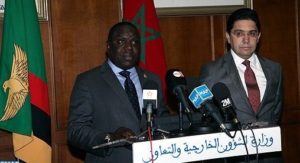 As Morocco’s relations with African countries are gaining momentum thanks to its African strategy underpinned by south-south cooperation, based on co-development and solidarity, and as the Kingdom’s return to the African Union is hailed as a landmark event for the development and stability of the continent, the Algeria-backed Polisario is losing its last remaining strongholds in Africa.

Hardly a month goes by without announcements that such or such Government is withdrawing its recognition of the Polisario’s self-proclaimed Sahrawi Republic “SADR”.

This weekend, the news came from Lusaka as the Zambian Foreign Minister Harry Kalaba reiterated that his country has withdrawn its recognition of the pseudo-SADR and severed all relations with the entity.

The Zambian decision was first announced by the Zambian top diplomat last July while he was on a visit to Morocco and was confirmed this weekend following the visit King Mohammed VI paid to this English speaking African country.

This visit, the first of its king by a Moroccan Monarch, was highlighted by summit talks between King Mohammed VI and President Edgar Chagwa Lungu who welcomed Morocco’s reinstatement within the African Union as a historic moment paving the way for a promising contribution from Morocco to the development and stability of Africa.

During their talks, the two Heads of state agreed to pool efforts to fight terrorism and to promote peace, security and stability on the continent, and also to find lasting solutions to ongoing conflicts in Africa.

Morocco has been carrying out a vast diplomatic offensive in the continent over the past few years, an offensive that proved successful and enabled Morocco to get closer to English-speaking African countries that were once the Polisario’s main supporters in the continent.

Many analysts expect Morocco’s diplomatic breakthrough to isolate further the pseudo-SADR, which will hardly have any supporters in Africa and in the African Union.