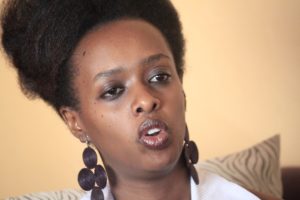 Social media in Rwanda was flooded this week with nude pictures believed to be Diane Shima Rwigara, a 35-year-old businesswoman who announced her intention to contest for the top job in the East-African nation.

The photos, which are currently making rounds on several media platforms, show Ms Rwigara completely naked and striking poses in different positions inside a house.

Rwigara is running against the current President Paul Kagame who has been in power for 17 years. She is also the first female independent candidate to have declared her interest to run for the top position.

The Human rights activist who is championing freedom of expression had not updated her active Twitter page since April 28 and her Facebook page since May 2.

In her manifesto, the 35-year-old said she will work to eradicate poverty, champion free speech, and provide health insurance for all Rwandans.

“Everybody is scared to express themselves because they are too scared of the ruling party. I will be tackling poverty, injustice and insecurity,” she said during her latest press conference.

Diane Shima Rwigara is the daughter of businessman Assinapol Rwigara, who was pivotal in the ruling Rwandan Patriotic Front. He died in 2015 in a road accident.

His daughter says his death was an assassination, but police reject her allegations.