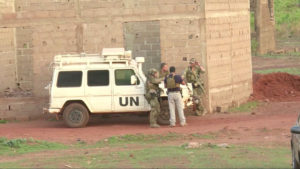 Two people have been killed in the Malian capital, Bamako after a suspected terrorist attack on a tourist resort on Sunday.

Local media reported that four gunmen arriving on motorbikes and a car stormed Le Campement Kangaba, near Dougourakoro in capital city Bamako. The resort is popular with foreigners and United Nations (UN) workers in the terrorism-stricken West African nation.

The attack was pushed out by Malian forces backed by French troops killing three attackers.

In a statement released by Mali’s Ministry of Security and Civil Protection, the resort attack was carried out by “armed individuals, certainly terrorists.” The statement said a Malian anti-terror force was on the scene.

“They [the armed men] exchanged gunshots with members of the special anti-terrorist force (FORSAT) who had arrived just a few minutes after the attack. FORSAT managed to secure the surroundings of the site. The operation to secure the premises is in progress,” the statement said.

In November 2015, gunmen raided a Malian hotel and killed at least 22 people, according to the UN Mission in Mali.

Fears of terrorist attacks have pushed Mali to extend a state of emergency on several occasions.

Earlier this month, the US Embassy in Bamako issued a travel warning, saying there was an increased security threat to Westerners.

“The US Embassy informs US citizens of a possible increased threat of attacks against Western diplomatic missions, places of worship, and other locations in Bamako that Westerners frequent.