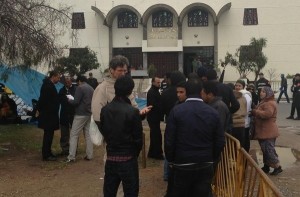 The Gdeim Izik trial was conducted according to the law, under the watch of observers whose reports stated that Morocco respected the rule of law. However, despite its efforts, Morocco is still the victim of an international campaign of defamation, led by Sahrawi activists around the world, and financed by Algeria’s petrodollars. In the light of these accusations, some clarifications should be made and some questions should be asked.

This paramilitary separatist organization was created in 1975 under the impulse of Algeria, Cuba and Libya to fight for the independence of Western Sahara, after Spain’s departure from the territory. Within the Cold War context, this Soviet style organization declared the creation of the Sahrawi Arab Democratic Republic (SADR) in 1976, and with Mohammed Abdel Aziz, the only president since 1976, amounting to 37 years of ‘democratic’ rule. The Front and its Republic are based in camps in Algeria in the Tinduf area, supervised by Algerian security forces.

Colonel Qaddafi helped arming the Polisario in the 70’s, when he was on America’s blacklist of states supporting terrorism. The military training in the fields of guerilla warfare was achieved with the help of Cuba, when guerilla warfare was at its peak. Moreover, most of the indoctrination was done in Cuba, where thousands of Saharawi children were sent for schooling, ending up in camps where they were treated as slave labor. Most of them forgot their mother tongue, the Hassanic language, and are perfectly fluent in Spanish.

As a traditional heritage from Mauritania and Mali, Blacks are not considered equals to the Moors. According to Human Rights Watch, Polisario admits that slavery is not eradicated in the camps, and the measures to punish those practices are not implemented.

The issue of a population census has been on the negotiation table for many years. Polisario claims that there are up to 165,000 people in the camps, whereas the Humanitarian aid given by the United Nations (UN) is sufficient for 90,000 people. In addition, demographic experts estimate the number to be around 45,000 people. The gap in those numbers is due to the need of high officials from Algeria and SADR to keep the aid flowing in.

For many years, Algeria has showed total indifference for the recurrent requests of the HCR, and has made an overall settlement of the conflict in the Western Sahara a requirement for carrying out the census. Visits from people outside the camps are extremely restricted and under close watch from Algeria’s security services.

According to the European Anti-Fraud office (OLAF), once the aid arrives in Oran, it takes about 48 days to arrive in the camps. At that time, large parts of the aid have already disappeared. The first beneficiary of the aid is the Algerian Red Crescent, followed by Polisario leaders who own luxurious properties in Spain. The aid confiscated by those ‘intermediaries’ is sold in Sub-Saharan Africa, or exchanged for weapons.

However, due to the weight of the energy trade between the European Union (EU) and Algeria, not much can be done to implement international rules and regulations on Algerian soil.

Terrorism: A Mean to an End?

Morocco’s intelligence has pinpointed for many years links between Polisario and terrorist elements in the Sahel and North Africa. Unfortunately, these warnings were interpreted as propaganda, and not much have been done to verify those claims. However, since the kidnapping in the Tindouf camps, on Algerian soil of three European humanitarian workers, things have changed.

When Qaddafi was in trouble, Polisario was obliged to repay its debt and send armed troops to support him. Reports showed that Sahrawis were found and captured by Libyan rebels in different battles. Algeria was openly against an intervention targeting its ally. Qaddafi allegedly paid the Polisario 10,000$ per fighter. After Qaddafi’s debacle, many observers and intelligence reports showed that military convoys were fleeing Libya in direction of the Sahel, which could lead to further instability in the region. How military convoys travelling thousands of kilometers could go unnoticed, especially when a war was going on?

When Mali’s sovereignty was breach by the MUJAO and AQIM, Mali’s Minister of Foreign Affairs publicly declared that Polisario members were identified and fighting alongside terrorist groups. Since France’s intervention, terrorists groups are fleeing and hiding in the Adran of Ifoghas region, close to the Algerian border. That mountainous region is perfect for guerilla warfare, which is Polisario area of expertise. Algeria was also against the intervention of France in Mali.

How Morocco is supposed to deal with activists affiliated with a terrorist organization, which was implicated in riots on its soil leading to the death of 13 persons? Maybe Morocco should have labeled them as foreign fighters, and send them to rot in Guantanamo instead of giving them a fair trial. In that case not many NGOs or politicians would have spoken in their favor.