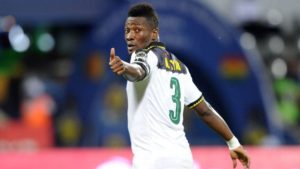 Ghana Black Stars’s Captain, Asamoah Gyan has obtained a license to operate an airline called Baby Jet airlines in the country, local media reports.
Ghana President, Nana Akufo-Addo made the announcement when he opened the first Aerospace and Aviation Exhibition of West Africa at the Kotoka International Airport on Tuesday.
Speaking to participants at the opening ceremony of the exhibition, President Akufo-Addo commended Gyan for his vision and assured Ghanaians of the NPP’s commitment to open up Ghana’s local airline industry to attract more players and drive competition.
The Baby Jet Airlines is expected to begin operations soon. However, it is yet to be ascertained whether the airline will be operating as a domestic airline or it will be operating as international company.
Earlier this year, Ghana minister for Aviation, Cecilia Dapaah, has hinted that Ghana will have its own national airline within the next two years.
The country has been without a national airline since 2010, when Ghana International Airlines ceased operation due to high indebtedness.
The previous government of President Mahama initiated steps for a new national airline which would be a partnership between the government and private sector investors.
Government in the 2017 budget removed the 17.5% VAT on domestic air tickets.