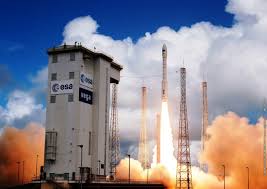 Europe’s Vega rocket conducted successfully in the night from Tuesday to Wednesday the launch of Morocco’s earth observation satellite, called Mohammed VI – A, from the space centre Centre in Kourou, French Guiana.

Morocco has now its own Satellite that started its new life in space, like a butterfly unfolding its wings, said the anchor who was commenting the unfolding of the launch operation. It’s a mission success, she said when the launch was completed. Everything went as planned, crowing the 4-year long great team work between the Moroccan team and their European partners.

Karim Tajmouati, General Manager of the National Agency for Land Conservation, Cadaster and Cartography (ANCFCC), who was attending the launch operation at the head of a large Moroccan delegation, said the Mohammed VI-A satellite is “a pride for the Kingdom of Morocco and for all Moroccans”.

This Satellite, wanted by King Mohammed VI, “is an advanced technological infrastructure that will allow the development of applications with high added value in various areas.

In his statement from Kourou base, he mentioned among the diverse uses mapping and land planning, monitoring of agricultural activities, prevention and management of natural disasters, and monitoring climate change and desertification.
“This successful project is undeniably the fruit of a serious, solid and exemplary cooperation between the Kingdom of Morocco and France,” he said.

“Full success and long life to the Mohammed VI-A satellite,” he added.

All attending delegations and scientists overseeing the operation expressed satisfaction at the successful launch. Mission accomplished, they said, expressing pride to have been part of this exhilarating experience.

The Mohammed VI – A, about 100-kilogram (2,400 lb), is the first satellite of the Kingdom dedicated to high-resolution imaging.

A second satellite, Mohammed VI – B, is scheduled for launch in the course of next year.

The countdown for Tuesday’s launch began nine hours and ten minutes before Vega’s scheduled lift-off. The satellite was separated 55 minutes and 33 seconds after take-off.

The Mohammed VI – A was built by the Thales Alenia Space and Airbus consortium for an estimated cost of €500 million.

Thales Alenia Space supplied the payload, including the optical instrument, the image transmission subsystem, and the ground segment for image processing and production.

Airbus was in charge of its integration, as well as supplying the platform and the ground segment for mission planning and satellite control.

Arianespace group says the Mohammed VI– A satellite will be used in particular for mapping and land surveying activities, regional development, agricultural monitoring, the prevention and management of natural disasters, monitoring changes in the environment and desertification, as well as border and coastal surveillance.