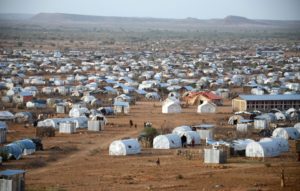 In a joint news release issued Wednesday, the World Food Program (WFP) and the Office of the UN High Commissioner for Refugees (UNHCR) said that food ration was cut by 20 per cent last year to below the 2,100 kilocalories per day required to sustain an average person.

The agencies are warning of deeper cuts from April unless new funding is received in March.

“After fleeing conflict and deprivation in their home countries, refugees deserve to be protected and supported,” said Samir Wanmali, WFP’s Acting Country Director in Ethiopia.

Ethiopia hosts more than 900,000 refugees, including those from Eritrea, Kenya, Sudan, South Sudan and Somalia.

Without new contributions, 650,000 refugees living in camps could soon become even more hungry and may eventually face severe hunger that could put lives at risk, the two agencies said, adding that young children are particularly at risk.

“The malnutrition rates in the camps are already high – further ration cuts could have a devastating effect,” said UNHCR Deputy Representative Matthew Crentsil.

Recent assessments show that malnutrition rates among children under the age of five are above the emergency threshold of 15 per cent in nearly half of the 26 refugee camps.

Conflict and drought in neighboring countries continue to force people to seek refuge in Ethiopia, which has a long tradition of hosting refugees. In 2017, nearly 110,000 refugees arrived in Ethiopia.