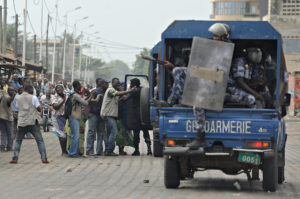 Chanting “50 years is too long,” thousands of protesters took to the streets in Togo on Wednesday, against President Faure Gnassingbé and his government.

The series of demonstrations against the ruling dynasty have been unfolding for 8 months in the West African tiny nation.

A 14-member opposition coalition is calling for the resignation of Faure Gnassingbé. He succeeded in 2005 with the support of the army to his father, General Gnassingbé Eyadéma, who led the country for 38 years. Faure has since been re-elected twice in elections highly disputed by the opposition.

A number of protesters were injured in the police crackdown. Security forces fired tear gas to disperse the demonstrators and a vehicle belonging to opposition leader Jean-Pierre Fabre was smashed, according to local media.

The government said the protest was a violation of the terms included in a mediation effort led by Ghanaian President Akufo-Addo.

The opposition wants a return to the country’s 1992 constitution, which set a two-term limit for presidents, applied retroactively, to prevent Gnassingbé from entering the presidential race in 2020 and 2025.

The political talks have hit a stalemate after the government proposed a two-term limit but without the retroactive clause.

The parties failed to agree on other crucial issues including the electoral reforms.