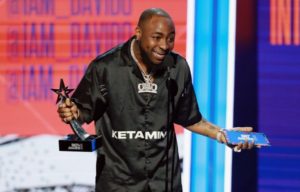 Nigerian-born pop star Davido won Best International Act at the BET Awards and urged greater collaborations between US and African artist and musicians.

As he picked up his trophy, Davido, 25, thanked his audience in Nigeria and said that Africa as a continent “has been so blessed.”

“My continent has been so blessed to influence other cultures. Let’s collaborate everybody,” the US-educated artist said.

David Adedeji Adeleke, better known by his stage name Davido, first came into the limelight in 2011 with his hit single, “Back When”.

His father is a Nigerian business magnate and his late mother was a university lecturer. He attended the British International School in Lagos.

Davido has been creating hits under the Afrobeat genre which is a fusion of African Pop, Rap, R&B and Dance. He has received dozens of awards and nominations in Nigeria and internationally, currently credited with about 29 awards and 74 awards nominations to his name.

On Sunday, Davido beat out artists including Nigerian popstar Tiwa Savage, UK’s Stormzy and DR Congo’s Fally Ipupa to win the coveted award. Davido also picked up the award in 2014.