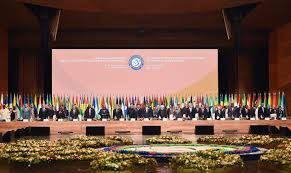 The autonomy initiative offered by Morocco for the settlement of the Sahara issue is the only realistic and feasible political solution to this regional dispute, said Minister Delegate for African Cooperation Mouhcine Jazouli at the 18th Summit of the Non-Aligned Movement, held in Baku (Azerbaijan) Oct.25-26.

To show its commitment to the principles of respect of sovereignty and territorial integrity of States, Morocco submitted in 2007 to the United Nations its autonomy plan for the Moroccan Sahara region, an initiative that the Security Council has described as “serious and credible” in all its Resolutions adopted since 2007, said the minister.

He affirmed that Morocco supports the UN exclusive political process engaged by the UN Secretary-General on the basis of the parameters defined by the Security Council since 2007 in order to reach a political, realistic, pragmatic and lasting solution to the Sahara issue.

This process has led to the two Geneva roundtable meetings convened with the participation of Morocco, Algeria, Mauritania and polisario, said Mr. Jazouli, noting that it is on the basis of this new dynamic that the Security Council reiterated in its Resolution 2468 adopted end of April 2019, its support to the UN chief efforts to advance the political process and called on all parties to the conflict to show “realism and a spirit of compromise to move forward in the negotiations”.

The Minister also welcomed NAM’s support of the new dynamic spurred by Security Council Resolutions 2440 and 2468 on the Sahara.