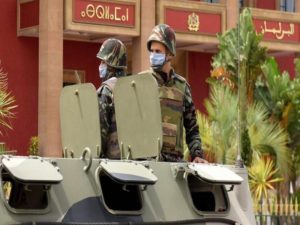 Morocco’s King Mohammed VI, supreme commander of the royal armed forces, commended the role played by the army in containing the coronavirus outbreak and their peacekeeping efforts in Africa.

In an Order of the Day marking the Royal Armed Forces 64th anniversary, the monarch expressed pride at the army’s “ permanent readiness to respond to the call of the Fatherland and to make the necessary sacrifices for its dignity and sovereignty,” adding, to this “is added this year, your immediate and strong involvement, pursuant to our high royal instructions, in the fight against the epidemic which is striking our country like other countries in the world, through the mobilization of all the human, material, medical accommodation and logistic resources available to our Armed Forces in order to participate in the fight against this pandemic and to limit its spread.”

The King lauded the Royal Armed Forces professionalism and active contribution in the management of the pandemic citing the preparation and rapid deployment of military field hospitals, with the provision of a number of centers with a large reception capacity, in order to transform them, if necessary, into medical isolation units, in addition to the reinforcement of the hospital Centers under the ministry of Health by teams made up of doctors, nurses and social workers from the Royal Armed Forces, the Royal Gendarmerie and the Auxiliary Forces.

This gave rise “to very beautiful images of national and professional solidarity with your civil counterparts in all the Kingdom’s hospitals,” said King Mohammed VI.

The King also praised the “rapid interaction between the units of the various land, air and maritime components and the Royal Gendarmerie, and their strong involvement in the front lines of the fight against this pandemic, alongside the various bodies of National Police, the Auxiliary Forces, the Territorial Administration and Civil Protection Services, in raising awareness and implementing the measures of the health containment on the ground, which has fostered adherence and respect by all Moroccans for its implementation.”

The Monarch also highlighted the professionalism and qualifications of the Royal Armed Forces and their sustained efforts to strengthen the surveillance and protection of the country’s land, sea and air borders by mobilizing the human element and providing it with the necessary equipment and the most advanced means of surveillance that enable it to effectively face the various threats.

Special emphasis was laid on the valor of the “soldiers deployed in our southern provinces, in defense of our territorial integrity, as well as all the members of our Army who vigilantly and rigorously ensure the security of the borders.”

The King also commended the members of the Royal Armed Forces taking part in peacekeeping operations in the Democratic Republic of the Congo and the Central African Republic, as well as the teams at the military field hospital in Zaatari.

“In perfect symbiosis with the values of human solidarity rooted in our authenticity and our History, you have contributed to the enrichment of the Kingdom’s capital in this field by organizing and supervising several international seminars, in partnership with the United Nations Organization, benefiting in this respect from the valuable and credible experience you have accumulated, said the Moroccan Monarch.