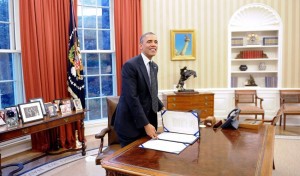 Arab Spring has so far brought only chaos not democracy and stability to most Arab countries, such as Tunisia and Egypt, US major allies in North Africa. However, one country offers hope for the Arab world and the US as it shows that there is really an alternative to the violent and bloody changes.

The alternative worked out by Morocco, though not flawless, has enabled the North African nation to open up politically, modernize and take up development challenges with self-confidence and upbeat.

These challenges as well as latest developments on the international scene will certainly be addressed during the meeting US president Barack Obama will have this week at the White House with King Mohammed VI.
Talks will also cover Morocco’s reforms, the situation in the Middle East and Africa, including violent extremism, democratic transitions, and economic development.
This visit takes place at a time there is a global concerns about U.S. foreign policy in the Middle-East and discomfort in the Arab World about Obama’s handling of the civil war in Syria and the use of chemical weapons by President Bashar Assad’s government.

US cautious approach in dealing with Syria and Iran has backfired and angered Saudi Arabia and other Gulf monarchies. Most Arab countries were apparently upset to see US president outmaneuvered by Russian cunning diplomacy, forcing Washington to make a U-turn and giving Syrian dictator Bachar Assad the chance to survive instead of swift actions.
US allies in the Arab and Muslim world are particularly worried that the US administration is turning inward and shelving its engagement and deterrence strategy.
There is also a growing feeling of unease in Arab and Muslim capitals as the U.S. government from afar looks increasingly befuddled, giving the sense that Washington is not as firm as it used to be in its resolve and its financial capacity.

In Africa too, the U.S. appears losing the ground to Chinese growing influence in the continent which is battered by  poverty and diseases,  armed conflicts, military coups , dictatorial one-party states, etc.
Despite large endowments of natural resources, the continent’s economic performance is still dismal as a result of poor macroeconomic management and a hostile environment for doing business.

However, Morocco, U.S. major ally in the region, stands out due to its economic performance and political stability. With few exceptions, such as South Africa and other handful countries, Morocco, which has no oil reserves, outperformed its neighbors and African peers.
The North African nation has weathered peacefully the Arab Spring storm that rocked and toppled the neighboring regimes of Zine El Abdine Ben Ali of Tunisia, Colonel Muammar Gaddafi of Libya and Hosni Mubarak of Egypt.

King Mohammed, whose legitimacy was never targeted by pro-democracy protesters deftly, retook the initiative by proposing a new constitution. Elections that followed led, for the first time, to victory for the moderate Islamist Justice and Development Party (PJD), which is now in office. Surely, some observers marveled, here was a model to follow for countries faced with demands for change, one that offered evolution rather than violent revolution.

Morocco’s Expanding Trade with Africa: Opportunity for US

As trade exchange with neighboring countries in Maghreb faltered due to row with Algeria, an OPEC member country, over the Western Sahara, Morocco,  boldened by the FTA deals sealed with the US, the EU and some Arab countries turned southward, developing trade, selling goods and services to sub-Saharan countries.
Although it is no longer member of the African Union, Morocco has upgraded its relationship and cooperation with African countries and  Morocco’s King conducted several African tours with visits to almost all African countries including  Senegal, Mali, Ivory Coast,  Gabon, Burkina Faso, Guinea, Niger, Cameroon, Gambia, Benin,  Congo Brazzaville, the Democratic Republic of Congo (DRC) and many others. Moroccan private banks and major Telecom Company have opened branches in several sub-Saharan countries.
Moroccan businesses are thriving in this region due to shared cultural, historical and religious legacy. Over the last decade, Morocco has been building a strong economic platform that offers huge business joint opportunities for American companies. Old and good friends always stand by each other despite some frictions from time to time.