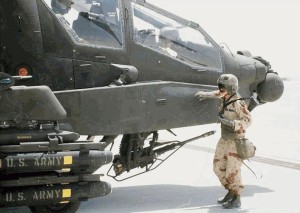 The ongoing campaign against terroristactivities in Iraq has received a boost from the US. The Iraqi air force received dozens of Hellfire air-to-ground missiles to combat the presence on al-Qaeda in the country.The missiles are reportedly being used by Iraqi aircraft in Anbar, targeting militant hideouts or vehicles. Drones will also be introduced.
Roadside bombings and suicide attacks are daily activities in Iraq. Sectarian violence between Sunnis and Shias has also led to random bombings at praying grounds and on Shia pilgrimage convoys. Most of these activities are linked to the hardline organization, Al-Qaeda.More than 8,000 people have been killed in attacks across Iraq this year, according to UN estimates.
Confirming the shipments of the military equipment to Baghdad, the spokesperson of the US State Department, Jen Psaki, stated they are “committed to supporting Iraq in its fight against terrorism through the Strategic Framework Agreement”. Washington and Baghdad signed the agreement in 2008. 75 Hellfiresare already in Iraq while the Scan Eagle drones will be available to them next year.
Iraqi troops have recently launched an operation against al-Qaeda militants in the desert province of Anbar, which borders war-torn Syria. According to Psaki, the delivery of the equipment are part of a “standard foreign military sales cases that we have with Iraq to strengthen their capabilities to combat this threat”.
The US intervened in Iraq under claims that the then leader of Iraq, Saddam Hussein, was in possession of Weapons of Mass Destruction. However, they are not willing to send their troops to fight against al-Qaeda in the country.
The ongoing war in the Syria has given al-Qaeda the opportunity to implant its base in Syrian controlled territories as pressure continues to mount in Iraq.