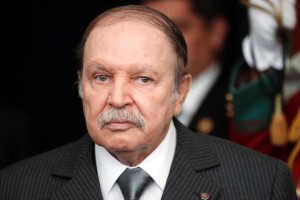 With less than three months before Algeria holds presidential elections, President Bouteflika has been taken to a hospital in France in what is being described as a “routine medical check”. Bouteflika is expected to stand as presidential candidate for the ruling National Liberation Front (FLN). His ability to rule the country has been questioned after he suffered from a minor stroke, in April last year, which kept him in a French hospital for almost three months.
Algeria was able to dodge the Arab Spring that the region experience. However, the political future of the country remains to be clouded with uncertainty as the 76 year old president continues to face health complications. Although there aren’t official announcements to declare Bouteflika as a presidential candidate, there are signs that he will be the flag bearer of the FLN.
A presidential statement aimed at clearing the air has stated that Bouteflika’s admission to the French Val-de-Grace hospital is a check-up scheduled since June 2013. It added that “the president’s health is improving certainly, and progressively” and will be staying in the hospital until Friday.
A leaked US diplomatic cable in 2007 suggested he might be suffering from terminal stomach cancer, and in the last few years he has rarely appeared in public or travelled outside the capital. The released presidential statement didn’t elaborate on the sickness he was suffering from but made references to the minor-stroke he suffered from last year.
Despite Algeria’s financial stability with more than $200 billion in reserves, the speculations on the country’s political uncertainty comes at a sensitive time in North Africa, where Egypt, Tunisia and Libya are still struggling with democratic transitions after popular uprisings ousted their veteran leaders in 2011.