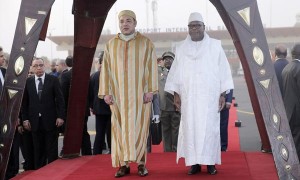 Morocco’s king started on Tuesday an official visit to Mali, first leg of a new African tour that will also lead him to Guinea Conakry, Côte d’Ivoire and Gabon.
The royal visit, the second in less than a year, translates Morocco’s commitment to Africa and its determination to upgrade the country’s relations with these states, part of its keen interest to promote South- South cooperation, as well as its resolve to position itself as a key player in Africa not only on the political and geo-strategic scales but also on the economic, social, cultural and spiritual levels.
This keen interest in the continent’s development is nothing new, since Morocco cancelled as early as 2000 all the debts of the poorest African countries and exempted their products and goods from customs duties. It likewise repeatedly expressed determination to foster cooperation and partnership with African countries, to help fulfill the aspirations of African peoples to development and stability and to uphold the continent’s causes.
Morocco has thus tirelessly endeavored to strengthen and diversify its economic relations with Africa and to encourage investments, at the institutional level as well as at the level of the private sector which injected significant investments in several sectors (banking, telecom, housing, insurance, mining etc.)
Several outstanding Moroccan groups like Maroc Telecom, the National Water and electricity Office (ONEE), Attijariwafa Bank, la Banque marocaine du commerce extérieur (BMCE), Addoha and Alliance housing groups, or Saham Group which controls one of Morocco’s biggest insurance companies, CNIA Saada, are operating in more than twenty sub-Saharan countries.
Like the King’s previous African tours, this new trip will be crowned by the signing of a series of economic cooperation agreements, mirroring the strong commitment of a King and of a country to give a boost to a mutually beneficial economic partnership.
The new royal visit also highlights the Kingdom’s role and contribution to international efforts to resolve crises in Africa as was the case in Mali. Actually when France intervened in Mali to chase out terrorist groups from the northern parts of the country in January 2013, Morocco did not hesitate to lend military and logistical assistance to French troops and initiated many solidarity actions to relieve the Malian people, shipping humanitarian assistance to Malian refugees and displaced persons in Mali and in neighboring countries, mainly Burkina Faso, Niger and Mauritania or deploying a military field hospital in capital city Bamako.
Few months later, in September, after presidential elections were held in Mali, king Mohammed VI flew to Bamako to attend the inauguration of President Ibrahim Boubacar Keita and renew thus his backing and personal involvement in the reconstruction and stabilization process of the African country which is going through a particularly important stage in its history.
The new royal tour will therefore reaffirm, if need be, Morocco’s commitment to Africa, a commitment based on a shared history and on shared aspirations.