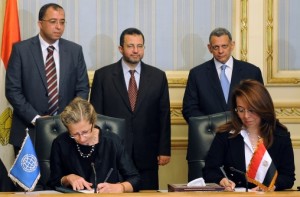 Egypt will be receiving around $300 million from the World Bank and European Union to be invested in development projects. The investment is expected to contribute to market growth and hope that the impoverished families will benefit from it. The project will be overseen by the Social Fund for Development and it is expected to create millions of temporary employment and thousands permanent employment.
At the launching of the program, World Bank’s Country Director for Egypt Hartwig Schafer underlined the importance of the program. He said that World Bank decided to allocate $200 million, compared to $146 million last year, because “from our own recent experience in parts of Europe where the Eurozone crisis has impacted the young, how important it is to keep those young hopes alive.”
The project is under the venture Egypt Emergency Labour Intensive Investment Project (ELIIP) with is geared towards the employment of unskilled citizens. The country is struggling to provide employment for its youth and the revolution has further increased pressure on authorities. Hartwig said that “growth is necessary” and an “indispensable condition for sustained job creation and poverty reduction.”
The Egyptian government collaborated with 146 NGO’s last year to provide jobs. This year’s project will concentrate on providing employment in urban and rural areas, and improving the proficiency of kindergarten. 15 NGO’s will also be promoting youth employment in partnership with small-time local contractors. 8,5million and 2,300 temporal and permanent jobs are expectedly to be created respectively according to a Cabinet statement.
The strategyunder which the project will be executed is expected to boost market growth and reduce poverty.
The European Union dedicated €70 million to the project and hopes that the project will be successful.